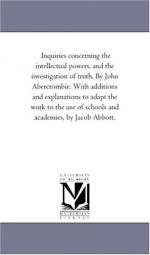 Get Jacob Abbott from Amazon.com
View the Study Pack

This Biography consists of approximately 1 page of information about the life of Jacob Abbott.

Jacob Abbott (14 November 1803-31 October 1879), known today primarily for his juvenile works, was born and raised in Hallowell, Maine. After graduating from Bowdoin College, he taught briefly at the Portland Academy, where Henry Wadsworth Longfellow was one of his pupils, before becoming professor of mathematics and natural philosophy at Amherst College. Abbott was interested in educational theory and in his classes and writings undertook to treat children as intelligent beings, not talking down to them or being patronizing. His The Young Christian (Boston: Peirce & Parker, 1832) and similar religious books, and the twenty-eight volume "Rollo Books" series (1834 on) are more human and less formal than other children's literature of the day, while at the same time instructional. Abbott wrote or edited over 200 volumes before his death and became a wealthy man from them. He died at Farmington, Maine.

More summaries and resources for teaching or studying Jacob Abbott.

Jacob Abbott from Gale. ©2005-2006 Thomson Gale, a part of the Thomson Corporation. All rights reserved.