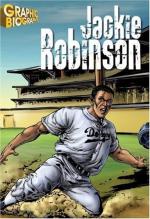 Get Jack Roosevelt Robinson from Amazon.com
View the Study Pack

This Biography consists of approximately 2 pages of information about the life of Jack Roosevelt Robinson.

Jackie Robinson was born on January 31, 1919, in Cairo, Georgia, the son of a sharecropper. After his father deserted his mother, the family moved in 1920 to Los Angeles. Robinson attended Muir Technical High School, where his athletic feats opened college doors. At Pasadena Junior College and at the University of California at Los Angeles, he won acclaim in basketball, football, and baseball. In 1941, when family financial problems forced him to leave the University of California without a degree, he played professional football. In 1942 he enlisted in the Army and in 1943 was commissioned a second lieutenant. He served as a morale officer, and his opposition to racial discrimination led to a court-martial for insubordination, but he was acquitted.

In 1944 Robinson began a professional baseball career, playing with the Kansas City Monarchs of the Negro Major League. His performance in the east-west championship games (1945) interested Branch Rickey, general manager of the Brooklyn Dodgers, who was scouting black players. A baseball innovator, Rickey knew that civil rights laws would soon end segregation in major league baseball, and he chose Robinson as a test case for integrating the sport. In 1946 Robinson signed a Dodger contract and was assigned to the Montreal team of the International League. Cautioned to prove himself worthy because other black players' futures depended on his success, Robinson maintained a subdued posture. He achieved stardom with the Dodgers, a team he joined in 1947, and in 1949 won the National League's batting championship and its Most Valuable Player Award.

With the admission of other African Americans to baseball, Robinson began to aggressively advocate more honest integration. His exposés of racial prejudice in baseball helped better the lot of black players but also branded him a troublemaker. He retired from the sport in 1956 and went into business. His lifetime batting average of .311 and his leadership prompted sportswriters in 1962 to vote him membership in Baseball's Hall of Fame.

As a businessman, Robinson fought for increased civil rights and economic opportunity for African Americans. For his civil rights work he received the Spingarn Medal from the National Association for the Advancement of Colored People in 1956. He died suddenly on October 24, 1972, in Stamford, Connecticut.

Jack Roosevelt Robinson from Gale. ©2005-2006 Thomson Gale, a part of the Thomson Corporation. All rights reserved.