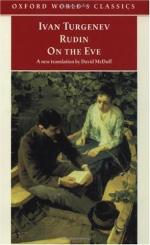 Get Ivan Sergeyevich Turgenev from Amazon.com
View the Study Pack

This Biography consists of approximately 9 pages of information about the life of Ivan Sergeyevich Turgenev.

The Russian novelist, dramatist, and short-story writer Ivan Sergeyevich Turgenev (1818-1883) was a founder of the Russian realistic novel. He ranks as one of the greatest stylists in the Russian language.

The life of Ivan Turgenev is woven like a bright thread throughout Russian history of the 19th century, during the time the nation's artistic and intellectual life experienced a golden age. He knew, was related to, or fought with almost every figure of any consequence in his homeland. He was also the first Russian author to establish a European reputation, and during his long years abroad he was friends with Gustave Flaubert, Henry James, Émile Zola, Guy de Maupassant, and many other writers. Turgenev's generous enthusiasm for the work of other men made him a perfect mediator between East and West.

Turgenev's biography is as much the story of his encounters with...

Ivan Sergeyevich Turgenev from Gale. ©2005-2006 Thomson Gale, a part of the Thomson Corporation. All rights reserved.