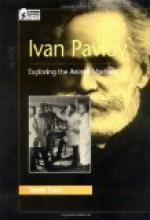 Get Ivan Petrovich Pavlov from Amazon.com
View the Study Pack

This Biography consists of approximately 5 pages of information about the life of Ivan Petrovich Pavlov.

The Russian physiologist Ivan Petrovich Pavlov (1849-1936) pioneered in the study of circulation, digestion, and conditioned reflexes. He believed that he clearly established the physiological nature of psychological phenomena.

Ivan Pavlov was born in Ryazan on Sept. 26, 1849, the son of a poor parish priest, from whom Pavlov acquired a lifelong love for physical labor and for learning. At the age of 9 or 10, Pavlov suffered from a fall which affected his general health and delayed his formal education. When he was 11, he entered the second grade of the church school at Ryazan. In 1864 he went to the Theological Seminary of Ryazan, studying religion, classical languages, and philosophy and developing an interest in science.

Making of a Physiologist

In 1870 Pavlov gained admission to the University of St. Petersburg (Leningrad), electing animal physiology as his major field and chemistry as his minor. There he studied inorganic chemistry under Dmitrii Mendeleev and...

Ivan Petrovich Pavlov from Gale. ©2005-2006 Thomson Gale, a part of the Thomson Corporation. All rights reserved.