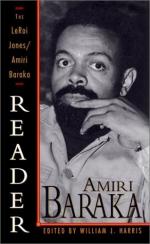 Get Imamu Amiri Baraka from Amazon.com
View the Study Pack

This Biography consists of approximately 3 pages of information about the life of Imamu Amiri Baraka.

The African American author Imamu Amiri Baraka (born 1934 as Everett LeRoi Jones) became influential during the 1960s as a spokesperson for radical black literature and theater.

Born as Everett LeRoi Jones in Newark, New Jersey, on October 30, 1934, Baraka studied at Rutgers, Columbia, and Howard universities and at the New School for Social Research. After taking a bachelor of arts degree at Howard in 1953, he spent two years in the U.S. Air Force in Puerto Rico.

Baraka's life may be divided into two major periods. As a resident of New York City's Greenwich Village, LeRoi Jones led the life of a typical white American. He married a Caucasian woman, Hettie Cohen, and they had two children. He and his wife published Yugen, a poetry magazine, and he co-edited a literary newsletter, Floating Bear. Jones's political commitment began when he visited Cuba in 1960.

Imamu Amiri Baraka from Gale. ©2005-2006 Thomson Gale, a part of the Thomson Corporation. All rights reserved.