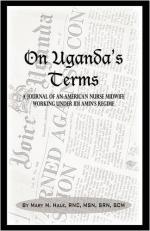 Get Idi Amin Dada from Amazon.com
View the Study Pack

This Biography consists of approximately 6 pages of information about the life of Idi Amin Dada.

Born between 1925 and 1927 in Koboko, West Nile Province, Idi Amin's father was a Kakwa. The Kakwa tribe exists in Uganda, Zaire (now Congo), and Sudan; some members of the tribe are associated with the Nubi, an uprooted population which emerged as a result of 19th century political upheavals. The Nubi (Nubians) are urbanized and individualistic, have a reputation for homicide and military careers, and are Muslims. Amin embraced Islam and attained a fourth grade education.

Amin was brought up by his mother, who abandoned his father to move to Lugazi. The death of his stepfather soon after separation from his mother led to speculation that he must have been either poisoned or "bewitched" by her.

Amin accompanied his mother and apparently acquired the militaristic qualifications...

Idi Amin Dada from Gale. ©2005-2006 Thomson Gale, a part of the Thomson Corporation. All rights reserved.