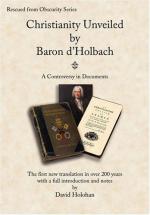 Get Holbach, Baron d' from Amazon.com
View the Study Pack

This Biography consists of approximately 2 pages of information about the life of Holbach, Baron d'.

Paul Henri Thiry, Baron d'Holbach (1723-1789), was a German-born French man of leisure, known as a conversationalist, host, scholar, secular moralist, and philosopher. He was celebrated for his freely spoken views on atheism, determinism, and materialism and for his contributions to Diderot's Encyclopédie.

Born in December 1723 in Edesheim not far from Karlsruhe in the Palatinate, Paul Henri Thiry was baptized a Roman Catholic. When he was 12 years old, his father took him to an ennobled and financially successful uncle, Franciscus Adam d'Holbach, a naturalized Frenchman living in Paris. From him the young Thiry received his upbringing, a fortune, and a new surname. After an early education in Paris, Paul Henri d'Holbach went in 1744 to the university at Leiden. By 1749 the young man had returned to France and become naturalized, and in 1753 he inherited his uncle's title and fortune.

At his town house in Paris and on his country estate at Grandval, D'Holbach entertained writers, philosophers, and other men of influence. His salon contributed much to the development and communication of 18th-century thought; but D'Holbach himself made a more direct contribution. This master of five languages wrote and studied continuously. In the 1750s he translated German scientific articles, and he contributed almost 400 such articles to Denis Diderot's Encyclopédie.

In 1761 began D'Holbach's written attacks on theologians and religious power. Under the name of his deceased friend N. A. Boulanger, D'Holbach published Le Christianisme dévoilé, a critical examination of Christianity. D'Holbach often resorted to pseudonyms or anonymity to protect himself from the conservative and repressive authorities. In the 1770s D'Holbach produced his positive substitutes for the religious and political dogmas he despised: Système de la Nature (1770), a secular ethics detailing the interrelation of ethics and government; Le Bon sens (1772; Good Sense), a very readable restatement of the radical ideas of the 1770 work; Politique naturelle (1773), a discussion of the moral influences exercised by government; and Morale universelle (1776), regarded by some as his ethical masterpiece.

D'Holbach taught that most of man's woes stemmed from religion. "Ignorance and fear," he claimed, "are the two hinges of all religion." He taught that morals were quite possible without religion: "Let ... reason be cultivated ... and there will be no need of opposing to the passions such a feeble barrier as the fear of the gods." D'Holbach, a provocative, freethinking iconoclast, died in January 1789.

Holbach, Baron d' from Gale. ©2005-2006 Thomson Gale, a part of the Thomson Corporation. All rights reserved.