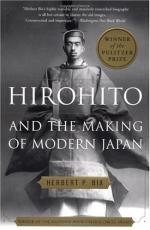 Get Hirohito from Amazon.com
View the Study Pack

This Biography consists of approximately 6 pages of information about the life of Hirohito.

Encyclopedia of World Biography on Hirohito

Hirohito (1901-1989) was the 124th emperor of Japan. He reigned during a period of internal turmoil, foreign expansion, international war, and national defeat, and presided over the transformation of the Japanese monarchy into a purely symbolic institution. As the occupant of Japan's throne for 63 years, he was the longest living monarch in modern history.

Hirohito was born on April 29, 1901. He was the first son of Crown Prince Yoshihito, who later became the Taisho emperor, and the grandson of Mutsuhito, the Meiji emperor. Following long-established custom, Hirohito was separated from his parents shortly after birth. He was cared for under the guardianship of a vice admiral in the imperial navy until November 1904, when he returned to the Akasaka Palace, his parents' official residence.

Even from early years, Hirohito was trained to act with the dignity, reserve, and sense of responsibility his future role would require. He...

More summaries and resources for teaching or studying Hirohito.

Hirohito from Gale. ©2005-2006 Thomson Gale, a part of the Thomson Corporation. All rights reserved.