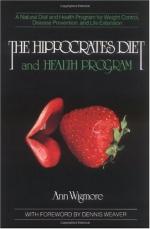 Get Hippocrates of Cos from Amazon.com
View the Study Pack

Hippocrates of Cos Biography

This Biography consists of approximately 2 pages of information about the life of Hippocrates of Cos.

World of Scientific Discovery on Hippocrates of Cos

Hippocrates was a famous Greek physician who is widely known as the "Father of Medicine." Although little is known about his life, a few facts are considered accurate.

Hippocrates was born on the Greek island of Cos around 460 b.c. to a family of physicians. Cos was the site of one of the great medical schools of ancient Greece, and Hippocrates taught there for many years. He also traveled widely, lecturing in Greece and probably throughout the ancient Mideast. He was well known in his lifetime and died around 377 b.c. in Larissa.

Hippocrates is considered the father of medicine because, through his school, he separated medical knowledge and practice from myth and superstition basing them instead on fact, observation, and clinical experience. Our knowledge of Hippocrates' methods and teachings comes from the Corpus Hippocraticum, the Hippocratic Collection. This is a series of about 60 books that seem to have been collected in the great Library of Alexandria after about 200 b.c. While Hippocrates may have written only a few and possibly none of these books, they are considered to be an expression of his medical teachings and philosophy, which became an important basis of Western medicine.

The Hippocratic approach to medicine, expressed in the books, emphasized that disease arose from natural causes, not from whims of the gods. Hippocrates insisted on careful observation of medical conditions; the books contain dozens of detailed clinical descriptions of diseases. He recommended as little interference as possible with the body's own ability to heal. Treatment focused on diet, rest, and cleanliness. He advanced the doctrine of the four humors, whereby disease was supposed to result from an imbalance among the body's four important fluids.

Hippocrates also emphasized a high ethical standard for physicians. The Hippocratic Oath is a statement of medical ethics. Developed over 2,000 years ago, it probably reflects the views of Hippocrates while not actually having been written by him. The oath pledges a physician to serve only the benefit of the patient, and to keep confidential anything he or she sees or hears in the course of treatment. Many medical students today still take a form of the Hippocratic Oath when they receive their medical degrees.

More summaries and resources for teaching or studying Hippocrates of Cos.

Hippocrates of Cos from Gale. ©2005-2006 Thomson Gale, a part of the Thomson Corporation. All rights reserved.