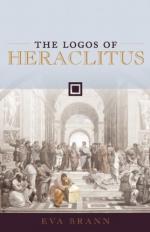 Get Heraclitus from Amazon.com
View the Study Pack

This Biography consists of approximately 2 pages of information about the life of Heraclitus.

World of Biology on Heraclitus

The thought of Heraclitus--a Greek philosopher who lived probably within the span of approximately 525-475 B.C. (actual dates unknown)--can be accessed only through a few fragments of text preserved in a second-hand way from quotes and citations by contemporaries and followers. No copies have been preserved of his one known book. Of the approximately 125 identified fragments, fewer than 90 are accepted as fully verbatim citations. Very little is known either, of the life of Heraclitus.

Despite the deficiency of established information, Heraclitus remains among the most discussed and influential of the pre-Socratic Greek philosophers. His thoughts and statements are still read and widely quoted today, and some of those fragments have become well known even to people unfamiliar with his name, including for example, the aphorism that "one cannot step twice into the same river." The river persists but the flow of the waters is ever-changing.

For biologists, the Heraclitean fragments suggest attention to process, tension, and complexity. He can be considered an ancient precursor of Darwin. In perhaps his most influential idea, Heraclitus broke with the notion that the natural world was fixed and stagnant, but taught instead that everything changes and evolves, that everything is in flux and nothing remains stagnant. He declared clearly, for example, the very modern notion that "the sun is overseer and sentinel of cycles, for determining the changes and the seasons which bring all things to birth."

His thought is also often summarized as a "doctrine of opposites," perhaps nowhere better demonstrated than in the following fragment: "Graspings: wholes and not wholes, convergent divergent, consonant dissonant, from all things one and from one thing all." Similar dialectics reemerge frequently in contemporary biology, e.g., in the debates about unity and diversity.

In some of his fragments, Heraclitus also underlined the kind of inquiry that has become central to the thinking of modern scientists and to the scientific method. His ideas were experientially based: "Whatever comes from sight, hearing, learning from experience: this I prefer." No one can forget the simple statement that helps to illuminate centuries of scientific curiosity: "Nature loves to hide."

More summaries and resources for teaching or studying Heraclitus.

Heraclitus from Gale. ©2005-2006 Thomson Gale, a part of the Thomson Corporation. All rights reserved.