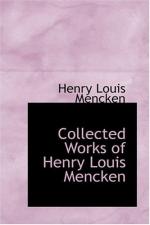 Get Henry Louis Mencken from Amazon.com
View the Study Pack

This Biography consists of approximately 3 pages of information about the life of Henry Louis Mencken.

Henry Louis Mencken (1880-1956) was an American journalist, editor, critic, and philologist. Though he was not a distinguished stylist, the extraordinary vigor of his expression was memorable.

The first American to be widely read as a critic was H. L. Mencken. Though, earlier, James Russell Lowell and Edgar Allan Poe had been better endowed than Mencken with critical intelligence, their proficiency in other literary forms had obscured to some degree their skills as critics.

Mencken was born in Baltimore, Md., on Sept. 12, 1880, and privately educated there. After graduating from Baltimore Polytechnic Institute at the age of 16, he became a reporter on the Baltimore Herald. He rose rapidly; soon he was the Herald's city editor and then editor.

In 1906 Mencken joined the organization known as the Sunpapers, which he served in a variety of ways until his retirement. His outstanding piece of journalism, widely syndicated, concerned the Scopes...

Henry Louis Mencken from Gale. ©2005-2006 Thomson Gale, a part of the Thomson Corporation. All rights reserved.