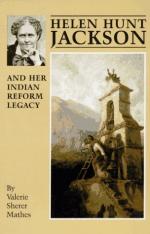 Get Helen Hunt Jackson from Amazon.com
View the Study Pack

This Biography consists of approximately 2 pages of information about the life of Helen Hunt Jackson.

Helen Hunt Jackson (1830-1885) was an American author of fiction whose most famous novel, Ramona, dramatized the plight of California's Indians.

Helen Hunt Jackson was born Helen Marie Fiske on October 15, 1830, in Amherst, Mass. Her father taught Latin, Greek, and philosophy at Amherst College. After her mother died of tuberculosis in 1844, an aunt cared for Helen and her younger sister. To recover from his grief and improve his health--he too suffered from tuberculosis--Professor Fiske sailed for the Near East in 1846. He died in Jerusalem in 1847.

In 1852 Helen met and married Lt. Edward Hunt of the Coast Survey Department. The son born in 1853 lived only 11 months. Another son, Warren ("Rennie"), was born in 1855. In 1863 her husband, by this time a major in the Navy Department, died while testing a submarine device he had developed. Yet another blow fell: Rennie died in 1865.

Hunt expressed her grief in poems that she...

Helen Hunt Jackson from Gale. ©2005-2006 Thomson Gale, a part of the Thomson Corporation. All rights reserved.