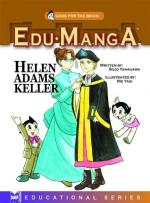 Get Helen Adams Keller from Amazon.com
View the Study Pack

This Biography consists of approximately 2 pages of information about the life of Helen Adams Keller.

Though both blind and deaf, Helen Adams Keller (1880-1968), American lecturer and author, traveled the world over, crusading for improvement in the education and life of the physically handicapped.

Helen Keller was born in Tuscumbia, Ala., on June 27, 1880. Though she was born a normal child, at the age of 18 months an illness developed that left her blind and deaf. Yet, there were signs that she possessed high intelligence. When Helen was 6, her mother heard of the pioneer work being done at the Perkins Institution in Massachusetts for teaching deaf and blind people to communicate. In March 1887, Anne Sullivan, a product of the institution, came to serve as Keller's teacher. One month after her arrival, Sullivan had taught Keller the word "water." This sudden learning that things had names unlocked a whole, new universe for the child.

By the time she was 16, Keller had passed the admissions examinations for Radcliffe College; in 1904 she graduated cum laude. As a young woman, she became determined to learn about the world, and to improve the lives of others. With insight, energy, and deep devotion to humanity, she lectured throughout the world, lobbied in Congress, and wrote thousands of letters asking for contributions to finance efforts to improve the welfare of the blind. She visited hospitals and helped blind soldiers. She taught the blind to be courageous and to make their lives rich, productive, and beautiful for others and for themselves.

Keller associated with some of the greatest people of her times, including Alexander Graham Bell, Mark Twain, Andrew Carnegie, John D. Rockefeller, Sr., and presidents Grover Cleveland, Calvin Coolidge, and Woodrow Wilson. She authored such books as Helen Keller's Journal, Optimism (an essay), Out of the Dark, Midstream: My Later Life, My Religion, The Song of the Stone Wall, The World I Live In, and The Story of My Life.

Sullivan served as Keller's counselor and companion. When Keller died in 1968, her name was a worldwide symbol of what the human spirit could accomplish despite severe physical limitations.

Helen Adams Keller from Gale. ©2005-2006 Thomson Gale, a part of the Thomson Corporation. All rights reserved.