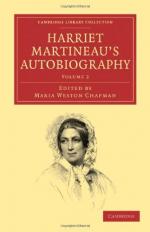 Get Harriet Martineau from Amazon.com
View the Study Pack

This Biography consists of approximately 2 pages of information about the life of Harriet Martineau.

Harriet Martineau (1802-1876), an English writer and an adherent of positivist philosophy, was one of the most widely admired writers of her day.

Harriet Martineau was born in Norwich on June 12, 1802. Her life is the story of adversity overcome. Armed with an excellent childhood education, she had to overcome deafness, the loss of her senses of smell and taste, extensive nervous disorder, and finally, heart disease. Her father died when she was in her early 20s, leaving the family destitute, and Martineau had to work for pennies by hack writing and doing needlework. With the publication in 1832-1834 of a series of short stories interpreting political economy for the layman, she gained a wide reading public. Her work in magazines and pamphlets, as well as her books, began to bring very adequate, if not rich, returns, and she quickly became one of the literary lions of London. England in the 1830s was a world in which politicians courted popular writers for political support, and Harriet Martineau became one of the most courted.

Attempting to improve her health, Martineau spent 1834 to 1836 in the United States. During this time she adopted the cause of abolitionism, the first of several relatively radical political causes which she would champion. Her impressions of America were recorded in Society in America (1837) and A Retrospect of Western Travel (1838).

Investing her time heavily in journalism, Martineau nevertheless brought out a new volume almost every year, speaking for a variety of forms of "philosophical radicalism." Though she began as a deeply religious person, she finally became a spokesman for the antitheological views of the philosopher Auguste Comte, popularizing him in a two-volume work (1853).

After her heart disease was diagnosed as fatal, Martineau began her autobiography in 1855 (it was published posthumously in 1877). But she lived another 21 years, produced at least eight more volumes of serious work, and became England's leading woman of letters, holding a kind of court at her tiny estate in Westmoreland, where she died on June 27, 1876. Historically she is remembered as a tough-minded writer who fought great odds to achieve a distinguished literary career.

More summaries and resources for teaching or studying Harriet Martineau.

Harriet Martineau from Gale. ©2005-2006 Thomson Gale, a part of the Thomson Corporation. All rights reserved.