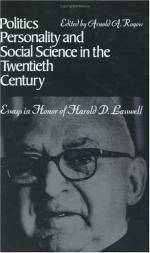 Get Harold Dwight Lasswell from Amazon.com
View the Study Pack

This Biography consists of approximately 3 pages of information about the life of Harold Dwight Lasswell.

The American political scientist Harold D. Lasswell (1902-1978) is known chiefly for his studies of political terminology, his application of psychology to politics, and his attempt to construct a system of politics modeled on theories of the natural sciences. He was also president of the American Political Science Association.

Harold Dwight Lasswell was born in Donnellson, Illinois, the son of a Presbyterian clergyman and a schoolteacher, on February 13, 1902. He attended the University of Chicago at 16 and graduated in 1922. He received his doctorate from the same institution in 1926; his dissertation, Propaganda Technique in the World War (1927) is recognized as a leading study on communication theory. At Chicago he studied under Charles Merriam, who first propounded the behavioral understanding to politics. He also studied at the universities of London, Geneva, Paris, and Berlin. At Berlin he studied Sigmund Freud, which cemented his psychological approach to political science.

Harold Dwight Lasswell from Gale. ©2005-2006 Thomson Gale, a part of the Thomson Corporation. All rights reserved.