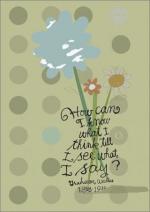 Get Graham Wallas from Amazon.com
View the Study Pack

This Biography consists of approximately 3 pages of information about the life of Graham Wallas.

Graham Wallas (1858-1932) was a British sociologist, political scientist, antirationalist, and proponent of a psychological approach to the study of politics.

The son of a Sunderland clergyman, Graham Wallas endured a strict puritanical upbringing, and it was not without some relief that he left home to attend Shrewsbury School and Corpus Christi College, Oxford. Following his studies, he pursued a preparatory school teaching career but was constantly in trouble regarding matters of religious conformity.

In 1886 Wallas joined the Fabian Society and became a member of its executive committee. He resigned from the society in 1895 partly because of political disagreement and partly because of boredom. Although he was primarily concerned with the almost universal lack of concern for psychology on the part of political scientists, he dealt also with general problems of epistemology and methodology.

Assuming an antirationalist posture, Wallas believed it dangerous (especially in a democracy) to assume...

More summaries and resources for teaching or studying Graham Wallas.

Graham Wallas from Gale. ©2005-2006 Thomson Gale, a part of the Thomson Corporation. All rights reserved.