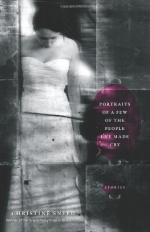 This Biography consists of approximately 7 pages of information about the life of Grace Paley.

The American writer Grace Paley (born 1922) is best known for her three collections of short stories, The Little Disturbances of Man (1959), Enormous Changes at the Last Minute (1974), and Later the Same Day (1985). As long as she has been a writer, Paley has also been an activist, supporting various anti-war, anti-nuclear, and feminist movements. In her writing, however, she does not push a political agenda and prefers instead to chronicle the everyday lives of men and women.

Born in the Bronx, New York, Paley was the youngest child of Russian-Jewish immigrant parents. She grew up in a socialist, intellectual household amid a babble of three languages---Yiddish, Russian, and English. As a writer of fiction, Paley would pick up on the music of all three tongues, celebrating their rhythms and idioms.

From an early age, she wrote poetry, and at age 17 she took a course with the...

More summaries and resources for teaching or studying Grace Paley.

Grace Paley from Gale. ©2005-2006 Thomson Gale, a part of the Thomson Corporation. All rights reserved.