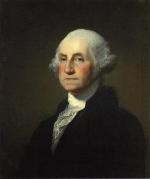 Get George Washington from Amazon.com
View the Study Pack

This Biography consists of approximately 8 pages of information about the life of George Washington.

George Washington (1732-1799) was commander in chief of the American and French forces in the American Revolution and became the first president of the United States.

George Washington was born at Bridges Creek, later known as Wakefield, in Westmoreland County, Va., on Feb. 22, 1732. His father died when George was eleven years old, and the boy spent the next few years with his mother at Ferry Farm near Fredericksburg, with relatives in Westmoreland, and with his half brother at Mount Vernon. By the time he was 16 he had a rudimentary education, studying mathematics, surveying, reading, and the usual subjects of his day. In 1749 Washington was appointed county surveyor, and his experience on the frontier led to his appointment as a major in the Virginia militia in 1752.

Virginia governor Robert Dinwiddie appointed the 21-year-old Washington to warn the French moving into the Ohio Valley against encroaching...

More summaries and resources for teaching or studying George Washington.

George Washington from Gale. ©2005-2006 Thomson Gale, a part of the Thomson Corporation. All rights reserved.