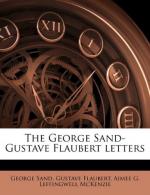 Get George Sand from Amazon.com
View the Study Pack

This Biography consists of approximately 4 pages of information about the life of George Sand.

The French novelist George Sand (1804-1876) was the most successful woman writer of her century. Her novels present a large fresco of romantic sentiment and 19th-century life, especially in its more pastoral aspects.

George Sand was born Armandine Aurore Lucille Dupin in Paris on July 1, 1804. On her father's side she was related to a line of kings and to the Maréchal de Saxe; her mother was the daughter of a professional bird fancier. Aurore's father, Maurice Dupin, was a soldier of the Empire. He died when Aurore was still a child.

At the age of 14, tired of being the "apple of discord" between her mother and grandmother, Aurore went to the convent of the Dames Augustines Anglaises in Paris. Though she did her best to disrupt the convent's peaceful life, she felt drawn to quiet contemplation and direct communication with God.

To save Aurore from mysticism...

More summaries and resources for teaching or studying George Sand.

George Sand from Gale. ©2005-2006 Thomson Gale, a part of the Thomson Corporation. All rights reserved.