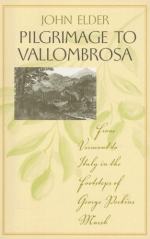 Get George Perkins Marsh from Amazon.com
View the Study Pack

This Biography consists of approximately 1 page of information about the life of George Perkins Marsh.

George Perkins Marsh (15 March 1801-23 July 1882), philologist and miscellaneous writer, was born in Woodstock, Vermont. His cousin was James Marsh, the philosopher-president of the University of Vermont. Marsh graduated from Dartmouth College in 1820 with a brilliant record but, after an unhappy year of teaching, returned home to study law. He was admitted to the bar in 1825. From 1835 on, Marsh was active in politics, and from 1861 to his death was minister to Italy. A brilliant, self-taught man, Marsh's interests were eclectic. His many accomplishments include: translating an Icelandic grammar (1838); promoting the domestication of the camel in America; assisting on the Oxford Dictionary; and publishing numerous philological works, such as Lectures on the History of the English Language (New York: Scribners, 1860) and The Origin and History of the English Language (New York: Scribners, 1862).

George Perkins Marsh from Gale. ©2005-2006 Thomson Gale, a part of the Thomson Corporation. All rights reserved.