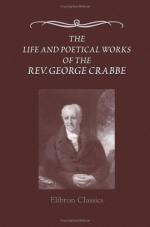 Get George Crabbe from Amazon.com
View the Study Pack

This Biography consists of approximately 2 pages of information about the life of George Crabbe.

The English poet George Crabbe (1754-1832) is noted for his unsentimental realism in portraying people and events and his precision in describing visible nature.

George Crabbe was born on Dec. 24, 1754, in Aldeburgh, a poor fishing village in Suffolk. His father, part owner of a fishing boat and a customs master, had had some education. Therefore when George proved to have no promise as a seaman, his father sent him to schools at Bungay and Stow Market.

In 1768 Crabbe was apprenticed to a surgeon. But this master taught him little, and in 1771 he changed masters and moved to Woodbridge. There he met his future wife, Sarah Elmy, who accepted his proposal and had the faith and patience not only to wait for Crabbe but to encourage his verse writing.

In 1772 Crabbe had his first literary success; his poem on hope won a prize offered by Wheble's Lady's Magazine. Two years later his "Inebriety" was published. During the next years he completed his apprenticeship, studied midwifery in London, and attempted to practice in Aldeburgh. Then, in April 1780, Crabbe borrowed £5 and set off for London to try his literary fortunes. A poem, "The Candidate," was accepted, but the publisher's bankruptcy deprived Crabbe of any possible profit. In March 1781 he appealed in desperation to Edmund Burke, who recognized the merits of the man and his poems.

With Burke's aid Crabbe published three long poems: The Library (1781), The Village (1782), and The Newspaper (1785). The Village was much the best, the first example of Crabbe's special talent for telling with literal and compelling truth the often sordid stories of rural and village folk. In 1781 Crabbe took orders, and the following year he became the Duke of Rutland's chaplain.

In December 1783 Crabbe was at last able to marry. Although the duke died in 1787, Crabbe's life continued to be marked by happy domesticity and moderate advancement as a clergyman. A second period of publication, with much critical and some popular success, produced The Parish Register (1807), The Borough (1810), and Tales in Verse (1812), all in the vein of The Village. In 1813 his wife died, and in 1814 Crabbe moved to his last home and parish, in Trowbridge, Wiltshire. Tales of the Hall, his last volume of poems, was published in 1817. Crabbe died on Feb. 3, 1832, in Trowbridge.

More summaries and resources for teaching or studying George Crabbe.

George Crabbe from Gale. ©2005-2006 Thomson Gale, a part of the Thomson Corporation. All rights reserved.