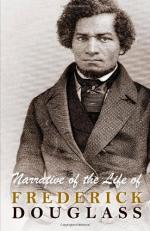 Get Frederick Douglass from Amazon.com
View the Study Pack

This Biography consists of approximately 1 page of information about the life of Frederick Douglass.

Frederick Douglass (1817"-20 February 1895), reformer and journalist, was born to a black slave in Tuckahoe, Maryland. Upon his escape from slavery in 1838, he adopted the last name of Douglass. He married a free black woman and settled in New Bedford, Massachusetts. Douglass so impressed the Massachusetts Anti-Slavery Society when he spoke before them in 1841 that they hired him, and during the next four years he toured the country, speaking out against slavery. His The Narrative of the Life of Frederick Douglass: An American Slave (Boston: American Anti-Slavery Office, 1845) is a frank and intelligent discussion of slavery by one who knew its restrictions firsthand. He soon aligned himself with the conservative abolitionists. From 1847 to 1860 he edited the North Star (later called Frederick Douglass' Paper) and continued his lecturing. In later years he published two more autobiographical works: My Bondage and My Freedom (New York: Miller, Orton & Mulligan, 1855) and Life and Times of Frederick Douglass (Hartford, Ct.: Park Publishing Co., 1881). He died in Washington, D.C.

Frederick Douglass from Gale. ©2005-2006 Thomson Gale, a part of the Thomson Corporation. All rights reserved.