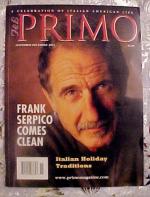 Get Frank Serpico from Amazon.com
View the Study Pack

This Biography consists of approximately 1 page of information about the life of Frank Serpico.

Frank Serpico was a former New York Police Department (NYPD) detective who gained notoriety in the early 1970s by exposing systematic corruption in the New York Police Department. Serpico, son of an Italian immigrant, was reared in Brooklyn, NewYork and entered the NYPD in 1959 as an idealistic young officer seeking a seemingly respectable profession. Frank Serpico became dismayed at the tolerance at that time for accepting graft in the NYPD by officers. When he was first offered a bribe, he immediately reported it to his fellow officers and superiors; however, his allegations were purposely sabotaged. Serpico then reported sophisticated corruption activities known as "pads"(controlled payments to the police) to the District Attorney's office, an outside authority. Dissatisfied with the resolution of the investigation, Serpico and other officers who were also disgusted with the systematic corruption befriended a reporter named David Burnham for the New York Times. On April 25, 1970 an article about the corrupt activities of the NYPD appeared on the front page of the New York Times. The article ushered in one of the biggest scandals in NYPD history, and John Lindsay, then-mayor of New York City created the Knapp Commission to investigate police corruption.

Serpico was shot in the face during an undercover narcotics operation on February 3, 1971. He did ultimately testify before the Knapp Commission and recommendations of the Knapp Commission led to many anti-corruption policies in the NYPD. A movie detailing Serpico's efforts was made in 1973s tarring Al Pacino as Serpico. Serpico retired in 1972 on a disability pension but remained active in police reform efforts.

More summaries and resources for teaching or studying Frank Serpico.

Frank Serpico from Gale. ©2005-2006 Thomson Gale, a part of the Thomson Corporation. All rights reserved.