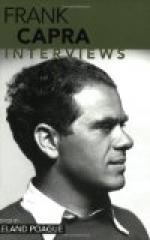 Get Frank Capra from Amazon.com
View the Study Pack

This Biography consists of approximately 6 pages of information about the life of Frank Capra.

Filmmaker Frank Capra (1897-1991) was 1930s Hollywood's top director, creating several immensely popular movies that captured the mood of the Depression-era United States and earning more Academy Award nominations than any of his contemporaries.

"Capracorn" is the term some use to describe Frank Capra's style of movie-making, but even if his films feel too sentimental to many critics and moviegoers, there is no denying the mastery he had of the film medium or that he developed a style uniquely his own. In the 1930s, he was the top director in Hollywood, turning out a series of films that touched the hopes and fears of the nation as it struggled through the Great Depression and, in the process, Capra garnered more Oscar nominations for himself and his pictures than any other filmmaker of the decade.

The youngest child in a large Sicilian family, Frank was...

More summaries and resources for teaching or studying Frank Capra.

Frank Capra from Gale. ©2005-2006 Thomson Gale, a part of the Thomson Corporation. All rights reserved.