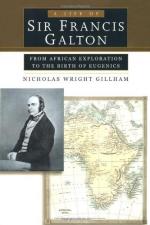 Get Francis Galton, Sir from Amazon.com
View the Study Pack

This Biography consists of approximately 3 pages of information about the life of Francis Galton, Sir.

The English scientist, biometrician, and explorer Sir Francis Galton (1822-1911) founded the science of eugenics and introduced the theory of the anticyclone in meteorology.

Francis Galton was born on Feb. 16, 1822, at Birmingham, the son of Samuel Galton, a businessman, and Violetta Galton. After schooling in Boulogne and privately, he began to study medicine in 1838 but also read mathematics at Trinity College, Cambridge.

The death of Galton's father in 1844 left him with considerable independent means, and he abandoned further medical study to travel in Syria, Egypt, and South-West Africa. As a result, he published Tropical South Africa (1853) and The Art of Travel (1855). His travels brought him fame as an explorer, and in 1854 he was awarded the Gold Medal of the Geographical Society. He was elected fellow of the Royal Society in 1856.

Turning his attention to meteorology, Galton published Meteorographica (1863), in which he described weather mapping, pointing out for the...

Francis Galton, Sir from Gale. ©2005-2006 Thomson Gale, a part of the Thomson Corporation. All rights reserved.