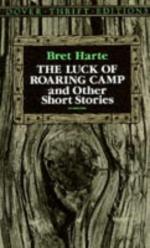 Get Francis Brett Harte from Amazon.com
View the Study Pack

This Biography consists of approximately 3 pages of information about the life of Francis Brett Harte.

Francis Brett Harte (1837-1902), known as Bret Harte, an American poet and fiction writer who specialized in local color and regional stories, set the fashion in fiction for a number of writers in the era following the Civil War.

Bret Harte, born in Albany, New York, had a somewhat sketchy education in the East before he followed his widowed and recently remarried mother and her family to the Pacific Coast in 1854. There he taught school for a year, visited the Mother Lode mining country, and worked briefly for an express company.

Harte got his professional start between 1857 and 1860, when he was a journalist in Union, Calif. He moved to San Francisco, worked in government offices, and contributed writings to the Golden Era and the Californian which brought him prominence in literary circles. A collection of poems, The Lost Galleon, and a volume of parodies, Condensed Novels...

Francis Brett Harte from Gale. ©2005-2006 Thomson Gale, a part of the Thomson Corporation. All rights reserved.