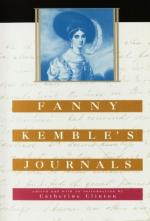 Get Frances Anne Kemble from Amazon.com
View the Study Pack

This Biography consists of approximately 2 pages of information about the life of Frances Anne Kemble.

Born into a famous English theatrical family, Frances Anne Kemble (1809-1893), known as Fanny Kemble, went to America in 1832, where she was celebrated both for her dramatic talent and her cultural observations.

Frances Anne Kemble was born on November 27, 1809. The daughter of actor Charles Kemble and his actress wife Maria Theresa De Camp, she could claim full membership in the aristocracy of the British theater. By the time she traveled with her father to their New York opening in 1832, she was an established dramatic star. For two seasons Kemble and the company toured the United States, playing to wildly enthusiastic audiences. But in spite of her success, Kemble hated what she thought of as the artificiality of acting. She was happy to retire in 1834 to become the wife of Pierce Butler, heir to a rich Georgia plantation.

Kemble published a record of her 2-year theatrical tour, Journal of a Residence in America (1835). It was an incisive and genuinely good-humored account, but such publications by foreigners were the rage then and thin-skinned critics made her the target of journalistic wrath. Kemble's marriage, in the meantime, was becoming troubled. Her romantic notions about life on a plantation were rudely shocked by the facts. Unable to live with slavery, she withdrew, first visiting England in 1841 and breaking formally with her husband in 1846. For a year she returned to the British stage and in 1847 moved to Italy, where she wrote A Year of Consolation (1848). In 1848 Butler sued for divorce in a widely celebrated case. After a year the divorce was granted, with custody of their two daughters going to Butler.

Kemble returned to the United States, making a career of giving public readings from Shakespeare. This innovation brought her enthusiastic applause and a more than decent income. In 1863, in a very successful attempt to influence British public opinion against the Confederate states, she published an account of her plantation experience, Journal of a Residence on a Georgia Plantation. She published several later volumes of autobiography and also literary criticism, as well as a novel, Far Away and Long Ago (1889).

Frances Anne Kemble from Gale. ©2005-2006 Thomson Gale, a part of the Thomson Corporation. All rights reserved.