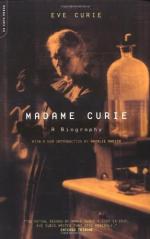 Get Eve Curie from Amazon.com
View the Study Pack

This Biography consists of approximately 6 pages of information about the life of Eve Curie.

The daughter of Nobel award-winning scientist Madame Curie, Eve Curie (born 1904) would gain fame on her own terms: as a concert pianist and journalist during World War II.

The youngest child born to Pierre and Marie (Sklodowska) Curie, discoverers of radium and Nobel Prize recipients, Eve Curie's interests and talents were more musical, literary, and political than scientific. Encouraged by her mother, Curie developed her early skill in music, and her first career was as a concert pianist. Later she would turn her talents to writing, lecturing, and international advocacy on behalf of Free France during World War II. During the 1950s and 1960s, Curie worked for the North Atlantic Treaty Organization (NATO), and for the United Nations' Childrens' Fund in Greece.

Curie was born in Paris, France on December 6, 1904. She had one older sister, Irène, who shared her parents' scientific...

More summaries and resources for teaching or studying Eve Curie.

Eve Curie from Gale. ©2005-2006 Thomson Gale, a part of the Thomson Corporation. All rights reserved.