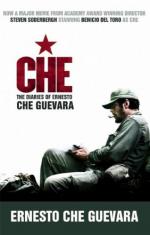 Get Ernesto Guevara from Amazon.com
View the Study Pack

This Biography consists of approximately 2 pages of information about the life of Ernesto Guevara.

Ernesto Guevara was born on June 14, 1928, in Rosario. Of Spanish and Irish descent, he suffered from asthma, spending his childhood in a mountain town near Rosario. At an early age he read history and sociology books and was particularly influenced by the writings of the Chilean Communist poet Pablo Neruda. At 19 Guevara entered the medical school of the University of Buenos Aires.

In 1952 "Che" Guevara ("Che" is an Argentine equivalent of "pal") broke off his studies in order to set out with a friend on a transcontinental trip which included motorcycling to Chile, riding a raft on the Amazon, and taking a plane to Florida. He returned to Argentina to resume his studies, graduating with a degree of doctor of medicine and surgery in 1953.

More summaries and resources for teaching or studying Ernesto Guevara.

Ernesto Guevara from Gale. ©2005-2006 Thomson Gale, a part of the Thomson Corporation. All rights reserved.