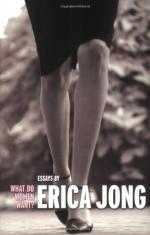 Get Erica Mann Jong from Amazon.com
View the Study Pack

This Biography consists of approximately 8 pages of information about the life of Erica Mann Jong.

Since publishing her grounding-breaking first novel, Fear of Flying in 1973, best-selling American feminist writer Erica Jong (born 1942) has published fiction, collections of poetry, and countless articles about the lives of women, focusing on stories of sex, love, possibilities, and adventure.

Erica Jong grew up on Manhattan's Upper West Side, in a house of artists. Jong's mother was a portrait painter whose parents had immigrated from Odessa in Russia in the early twentieth century. Her father was a songwriter who became a businessman so he could support the family. "We had all the problems of a New York Jewish intellectual family," Jong commented in a Washington Post interview in 1997. "It was hard to get a word in at the dinner table. When I first saw Woody Allen's Hannah and Her Sisters, I thought he was writing about me."

Always Circling Back to Writing

Erica Mann Jong from Gale. ©2005-2006 Thomson Gale, a part of the Thomson Corporation. All rights reserved.