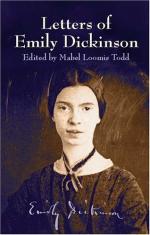 Get Emily (Elizabeth) Dickinson from Amazon.com
View the Study Pack
Related Topics
Hope Is the Thing With Feathers
Because I Could Not Stop For Death (Poem)
I Heard a Fly Buzz When I Died (Poem)
After Great Pain, a Formal Feeling Comes

This Biography consists of approximately 20 pages of information about the life of Emily (Elizabeth) Dickinson.

To be a poet was the sole ambition of Emily Dickinson. She achieved what she called her immortality by total commitment to the task, allowing nothing to deter her or intervene. Contrary to the myth that she would not deign to publish her verse, she made herculean efforts to reach out to a world that was not ready for the poems she offered; her manner and form were fifty years ahead of her time. The lines from James Russell Lowell's poem, "The First Snowfall," are typical of popular taste in Dickinson's time; compare them with ones immediately following by Dickinson on the same subject:

Emily (Elizabeth) Dickinson from Gale. ©2005-2006 Thomson Gale, a part of the Thomson Corporation. All rights reserved.