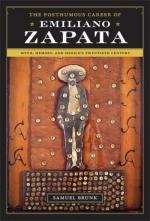 Get Emiliano Zapata from Amazon.com
View the Study Pack

This Biography consists of approximately 2 pages of information about the life of Emiliano Zapata.

Emiliano Zapata (ca. 1879-1919), Mexican agrarian leader and guerrilla fighter, was the symbol of the agrarian revolution.

Emiliano Zapata was born in Anenecuilco, Morelos, to a landless, but not poor, family which dealt in livestock. Orphaned at 16, he sharecropped and traded horses in his birth-place. During the closing years of the Porfirio Diaz dictatorship Zapata took part in local opposition politics, with a 6-month interruption while he served as a soldier.

In September 1909 Zapata was elected president of the group in Anenecuilco designated to reclaim the community's ejidal lands. He backed the unsuccessful opposition gubernatorial candidacy of Patricio Leyva. In March 1911, after several months of contact with the maderistas, Zapata joined the rebellion against Diaz. The major effort of the zapatistas was an attack on Cuautla.

With the fall of the Diaz regime Zapata initiated his recurring demands--land for the peasants, removal of federal troops from Morelos, and...

More summaries and resources for teaching or studying Emiliano Zapata.

Emiliano Zapata from Gale. ©2005-2006 Thomson Gale, a part of the Thomson Corporation. All rights reserved.