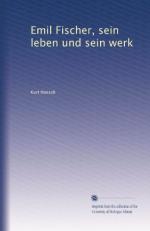 Get Emil Fischer from Amazon.com
View the Study Pack

This Biography consists of approximately 4 pages of information about the life of Emil Fischer.

The German chemist Emil Fischer (1852-1919), perhaps the greatest of the organic chemists, is known for his work in the study of pure sugars and proteins.

Of the many natural products available for man's use, perhaps no group is so important as the carbohydrates. Until 1884, however, no exact scientific study of the carbohydrates had been undertaken, and little was known concerning their chemical constitution or the arrangement of their molecules. Between 1884 and 1900 Fischer successfully determined the...

More summaries and resources for teaching or studying Emil Fischer.

Emil Fischer from Gale. ©2005-2006 Thomson Gale, a part of the Thomson Corporation. All rights reserved.