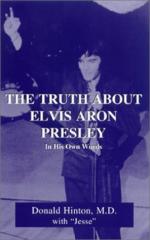 Get Elvis Aron Presley from Amazon.com
View the Study Pack

This Biography consists of approximately 4 pages of information about the life of Elvis Aron Presley.

Elvis Aron Presley (1935-1977), the "King of Rock 'n' Roll," was the leading American singer for two decades and the most popular singer of the entire rock 'n' roll era.

Elvis Aron Presley was born in Tupelo, Mississippi, on January 8, 1935, to Gladys and Vernon Presley. His twin brother, Jesse Garon Presley, died shortly after birth. Elvis's singing ability was discovered when he was an elementary school student in Tupelo, and he participated in numerous talent contests there and in Memphis, Tennessee, where the family moved when Elvis was 13.

It was in 1953, after he graduated from L. C. Humes High School in Memphis, that Elvis, working as a truckdriver, began paying his own way into the Memphis Recording Services studio to cut his own records. Less than a year later he recorded "That's All Right Mama" for Sun Records. It became his first commercial release, selling 20,000 copies.

Elvis Aron Presley from Gale. ©2005-2006 Thomson Gale, a part of the Thomson Corporation. All rights reserved.