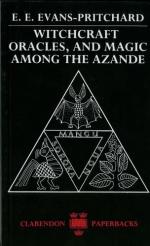 This Biography consists of approximately 2 pages of information about the life of Edward Evan Evans-Pritchard, Sir.

The English social anthropologist Sir Edward Evan Evans-Pritchard (1902-1973) did pioneer research in the social structure, history, and religion of African and Arab peoples.

Edward Evans-Pritchard was one of the foremost anthropologists of the mid-twentieth century. The son of an Anglican clergyman, Evans-Pritchard read history at Exeter College, Oxford, and received a doctorate in anthropology at the London School of Economics. His first research was from 1926 to 1932 with the Azande of the southern Sudan and the Congo. He did further fieldwork in 1935-1936 and in 1938, mainly with the Nuer and other Nilotic peoples of the southern Sudan.

Before World War II Evans-Pritchard served on the faculties of the London School of Economics, the Egyptian University in Cairo, and Cambridge University. During this period he produced his two most famous works: Witchcraft: Oracles and Magic among the Azande (1937) and The Nuer (1940). The first is a brilliant exposition...