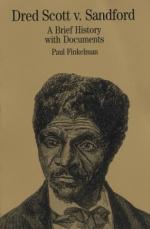 Get Dred Scott from Amazon.com
View the Study Pack

This Biography consists of approximately 2 pages of information about the life of Dred Scott.

Dred Scott (1795-1858), in an effort to gain his freedom, waged one of the most important legal battles in the history of the United States.

Dred Scott was born a slave in Southampton County, Va. in 1795. Industrious and intelligent, he was employed as a farmhand, stevedore, craftsman, and general handyman. In 1819 his original owner moved to Huntsville, Ala., and later to St. Louis, Mo. In 1832 he died, and Scott was sold for $500 to a surgeon in the U.S. Army who took Scott to the free state of Illinois in 1834 and on to Wisconsin Territory. Later the doctor returned with Scott to Missouri.

When the surgeon died, Scott passed to John Sanford. During these years he had married and had two daughters. Scott had tried unsuccessfully to escape from slavery and later to buy his freedom. In 1846 he filed suit in the Missouri state courts for his freedom on the grounds that residence in a free territory had liberated him.

Scott's suit finally came before the U.S. Supreme Court. On March 6, 1857, in Dred Scott v. John Sanford, after much debate the Supreme Court ruled against Scott 7 to 2, with Chief Justice Roger B. Taney giving the majority opinion. According to Taney, Scott could not sue Sanford because he was not a U.S. citizen. The justice argued that Scott was not a citizen because he was both a black man and a slave. Taney's remarks that black men "had no rights which the white man was bound to respect" came as a severe blow to abolitionists.

This crucial decision electrified the country, for Taney had ruled that African Americans were not citizens of the United States and that an act of Congress (the Missouri Compromise of 1820) was unconstitutional. He also had redefined the relationship between the states and the Federal government, making possible the expansion of slavery into the territories. Southerners rejoiced at the verdict; abolitionists denounced it and even went as far as discrediting the legitimacy of the Court itself.

A few months after the decision, on May 26, 1857, Scott's owner freed him. Scott continued to live in St. Louis until his death on Sept. 17, 1858. Although African Americans would not become citizens of the United States until the ratification of the 14th Amendment (1868), Scott's bid for freedom remained the most momentous judicial event of the century.

More summaries and resources for teaching or studying Dred Scott.

Dred Scott from Gale. ©2005-2006 Thomson Gale, a part of the Thomson Corporation. All rights reserved.