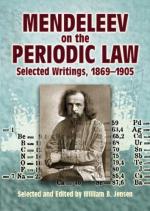 Get Dmitrii Ivanovich Mendeleev from Amazon.com
View the Study Pack

This Biography consists of approximately 6 pages of information about the life of Dmitrii Ivanovich Mendeleev.

The Russian chemist Dmitrii Ivanovich Mendeleev (1834-1907) is best known for the formulation of the periodic law of the chemical elements.

Dmitrii Mendeleev was born on Feb. 8, 1834, in the Siberian town of Tobolsk. He was the seventeenth and last child of Ivan Pavlovich and Maria Dmitrievna Mendeleev. At the age of 7 Dmitrii entered the gymnasium in Tobolsk and completed his studies in 1849. He displayed brilliant intellectual ability, a sharp memory, and a fascination for mathematics, physics, and geography. The following year he enrolled in the division of mathematical and natural sciences of the Main Pedagogical Institute of St. Petersburg, his father's alma mater.

The universities of Kazan and St. Petersburg were the principal centers of chemical activities in Russia during the first half of the 19th century. Mendeleev worked under Aleksandr A. Voskresenskii, whom the Russians call the grandfather of Russian chemistry. Mendeleev's first scientific...

Dmitrii Ivanovich Mendeleev from Gale. ©2005-2006 Thomson Gale, a part of the Thomson Corporation. All rights reserved.