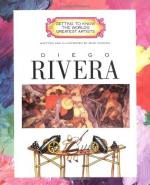 Get Diego Rivera from Amazon.com
View the Study Pack

This Biography consists of approximately 3 pages of information about the life of Diego Rivera.

Diego Rivera (1886-1957), Mexico's most famous painter, rebelled against the traditional school of painting and developed his own style, a combination of historical, social, and critical ideas depicting the cultural evolution of Mexico.

In 1907 Rivera received a grant to study in Europe and lived there until 1921. He first worked in the studio of Eduardo Chicharro in Madrid and in 1909 settled in Paris. He was influenced by the impressionists, particularly Pierre Auguste Renoir. Rivera then worked in a postimpressionist style, inspired by Paul Cézanne, Paul Gauguin, Georges Seurat, Henri Matisse, Raoul Dufy, and Amedeo Modigliani.

More summaries and resources for teaching or studying Diego Rivera.

Diego Rivera from Gale. ©2005-2006 Thomson Gale, a part of the Thomson Corporation. All rights reserved.