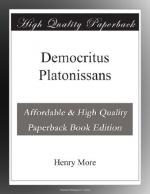 Get Democritus from Amazon.com
View the Study Pack

This Biography consists of approximately 4 pages of information about the life of Democritus.

Encyclopedia of World Biography on Democritus

The Greek natural philosopher Democritus (460-370 BC) promulgated the atomic theory, which asserted that the universe is composed of two elements: the atoms and the void in which they exist and move.

Democritus was born in Abdera, the leading Greek city on the northern coast of the Aegean Sea. Although the ancient accounts of Democritus's career differ widely, they all agree that he lived to a ripe old age, 90 being the lowest figure. During that long career Democritus wrote many books. Little Cosmology, a veritable encyclopedia, has perished because its contents displeased those, such as the philosopher Plato, whose decisions determined which works should be preserved. Of all of Democritus's many-sided interests, his espousal of the atomic theory accounts for his renown and also for the disappearance of the treatises which won him that renown.

Democritus did not originate the atomic theory; he learned it from...