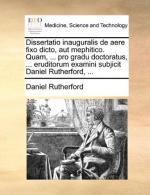 Get Daniel Rutherford from Amazon.com
View the Study Pack

This Biography consists of approximately 2 pages of information about the life of Daniel Rutherford.

An uncle of the great novelist Sir Walter Scott (1771-1832), Rutherford was born in Edinburgh, Scotland. Following in the footsteps of his father, who had been a professor of medicine at the University of Edinburgh for nearly 40 years, Rutherford studied medicine at the university.

One of Rutherford's teachers was the chemist Joseph Black, who was renowned for his work on carbon dioxide, which he called fixed air. At the time, scientists knew that carbon dioxide does not support combustion or respiration. Black himself had shown that in an atmosphere of carbon dioxide, small animals die and candles do not burn.

Black directed Rutherford to study the component of air that does not support combustion which Rutherford called mephitic, meaning noxious or poisonous air. After repeating Black's experiments with candles and mice, Rutherford removed carbon dioxide from mephitic air by passing the air through limewater, a strong alkali that was known to absorb carbon dioxide.

Rutherford's results were surprising. The gas that was left over contained no carbon dioxide, yet it was still mephitic--it would not support life or combustion. Rutherford called the gas phlogisticated air. According to the theory of combustion accepted at the time, a substance called phlogiston is released from burning materials and absorbed by the surrounding air. Thus Rutherford believed that if a gas could no longer support combustion, it had absorbed all of the phlogiston it could hold.

Rutherford reported his experiments on phlogisticated air in 1772 in his doctoral dissertation. Although such chemists as Henry Cavendish and Joseph Priestley may have been aware of the gas, Rutherford's report was the first published record describing a gas in the air, other than carbon dioxide, that extinguishes life. A few years later, Antoine-Laurent Lavoisier developed the modern theory of combustion which states that oxygen is required for combustion to occur and explained the behavior of Rutherford's gas, which we now call nitrogen.

More summaries and resources for teaching or studying Daniel Rutherford.

Daniel Rutherford from Gale. ©2005-2006 Thomson Gale, a part of the Thomson Corporation. All rights reserved.