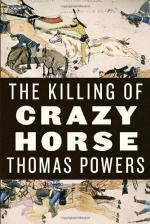 Get Crazy Horse from Amazon.com
View the Study Pack

This Biography consists of approximately 2 pages of information about the life of Crazy Horse.

The Native American Crazy Horse (ca. 1842-1877), Oglala Sioux war chief, is best known as the leader of the Sioux and Cheyenne renegades who won the Battle of the Little Bighorn, where Gen. Custer died.

Born on Rapid Creek, S. Dak., near the present Rapid City, Crazy Horse (Tashunca-Uitco) was a strange, quiet Sioux youth, serious and thoughtful. His skin and hair were so light that he was mistaken for a captive white child and was called "Light-Haired Boy" and "Curly."

Crazy Horse grew to manhood wild and adventurous, implacably hating the reservations and the encroaching whites. He married a Cheyenne girl and thus had close ties with that tribe. After he came to prominence as a warrior, many Cheyenne followed him.

More summaries and resources for teaching or studying Crazy Horse.

Crazy Horse from Gale. ©2005-2006 Thomson Gale, a part of the Thomson Corporation. All rights reserved.