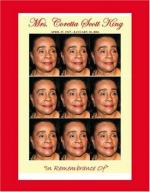 Get Coretta Scott King from Amazon.com
View the Study Pack

This Biography consists of approximately 5 pages of information about the life of Coretta Scott King.

Coretta Scott was born on April 27, 1929, in Perry County, Alabama, into a family that had owned land since the Civil War. Her parents, Obadiah and Bernice Scott, were truck farmers. Even though the Scotts were better off financially than most blacks in the area, life for them and their three children was difficult. Scott, along with her mother and sister, tended the family garden and crops, fed the chickens and hogs, and milked the cows. She helped supplement the family income by hiring out to hoe and pick cotton.

According to King, her "early schooling was affected by the system of segregation." She walked, rain or shine, six miles...

Coretta Scott King from Gale. ©2005-2006 Thomson Gale, a part of the Thomson Corporation. All rights reserved.