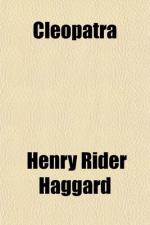 Get Cleopatra from Amazon.com
View the Study Pack

This Biography consists of approximately 3 pages of information about the life of Cleopatra.

Encyclopedia of World Biography on Cleopatra

Cleopatra (69-30 BC) was the last of the Ptolemaic rulers of Egypt. She was notorious in antiquity and has been romanticized in modern times as the lover of Julius Caesar and Mark Antony.

Third daughter of Ptolemy XII Auletes, Cleopatra VII Philopator (her full name) learned her political lessons by watching the humiliating efforts of her father to maintain himself on the throne of Egypt by buying the support of powerful Romans. When he died in 51 B.C., the ministers of Cleopatra's brother Ptolemy XIII feared her ambition to rule alone and drove her from Egypt in 48.

Cleopatra made preparations to return by force, but when Caesar arrived in Alexandria after the Battle of Pharsalus, she saw the opportunity to use him. She had herself smuggled to him in a rug. Ptolemy XIII died fighting Caesar, who restored Cleopatra to the throne with another...

More summaries and resources for teaching or studying Cleopatra.

Cleopatra from Gale. ©2005-2006 Thomson Gale, a part of the Thomson Corporation. All rights reserved.