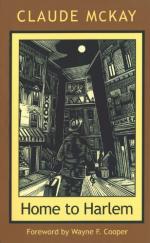 Get Claude McKay from Amazon.com
View the Study Pack
View the Lesson Plans
Related Topics
Amiable With Big Teeth
Romance in Marseilles
Harlem Shadows
A Midnight Woman to the Bobby

Claude McKay
This Biography consists of approximately 2 pages of information about the life of Claude McKay.

Claude McKay (1890-1948), Jamaican-born poet and novelist, is often called "the first voice of the Harlem renaissance." His verse and fiction are best known for protesting the social evils that plagued blacks.

Claude McKay was born in Jamaica, British West Indies, on Sept. 15, 1890. He began writing poetry, principally in Jamaican dialect, while a schoolboy. After a brief apprenticeship to a cabinetmaker and a short time as a policeman, he went to the United States and enrolled at Tuskegee Institute; later he went to Kansas State University. Neither school suited him, so he moved to New York, where a little interest in his first two volumes of poems--Constab Ballads and Songs from Jamaica (published in England, 1912)--preceded him.

Under the name Eli Edwards, McKay published a number of poems in American magazines; under his own name he published (in England) Spring in New Hampshire (1920). He was listed as associate editor of the Liberator, a "radical" magazine, which was the first to print "If We Must Die." This poem has come to be thought of as the birth cry of the "new Negro." It set the tone of protest that marks his fourth and best-known volume of verse, Harlem Shadows (1922), which also contains poems on conventional romantic themes.

In 1922 McKay represented the American Workers party at the Third Internationale in Moscow. He stayed in Europe for several years, settling in southern France, where he wrote most of his fiction. Home to Harlem (1928), a sensational revelation of black ghetto life, is his best-known novel. Banjo (1929) does for the French seaport city of Marseilles what the first novel did for New York's Harlem: it portrays life in the lower depths. Gingertown (1932) is a volume of unexceptional short stories, and Banana Bottom (1933), set in the West Indies, returns to his earlier subject matter. His fiction tended to be sensationally "realistic" and to emphasize those sordid elements in Negro life that attracted the prurient interest of the public.

Back in America in 1936 McKay wrote his autobiography, A Long Way from Home (1937). The fluent ease that characterized his best prose style is missing in this book. In 1940 he published Harlem: Negro Metropolis, a kind of sociohistorical narrative that is interesting but without much substance.

More summaries and resources for teaching or studying Claude McKay.

Claude McKay from Gale. ©2005-2006 Thomson Gale, a part of the Thomson Corporation. All rights reserved.