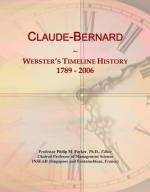 Get Claude Bernard from Amazon.com
View the Study Pack

This Biography consists of approximately 4 pages of information about the life of Claude Bernard.

The French physiologist Claude Bernard (1813-1878) originated the experimental approach to medicine and established general physiology as a distinct discipline.

Claude Bernard was born on July 12, 1813, in the village of Saint-Julien in the Rhône Department. His father, Pierre Jean François Bernard, was a wine maker. At 17 Claude went to the College of Thoissey, where he remained for only a year because his family could not afford to continue his education. He was apprenticed to a pharmacist in Lyons but left after 18 months.

Bernard enrolled in the Paris School of Medicine in 1834, and in 1839 he passed the examination for an internship. After obtaining his medical degree in 1843, he embarked on a lifetime of research. Recognition of his work followed and he was awarded the prize in experimental physiology of the Academy of Sciences (1847), was named a chevalier of the Legion of Honor...

More summaries and resources for teaching or studying Claude Bernard.

Claude Bernard from Gale. ©2005-2006 Thomson Gale, a part of the Thomson Corporation. All rights reserved.