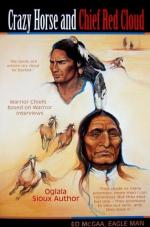 This Biography consists of approximately 2 pages of information about the life of Chief Red Cloud, Chief.

Born on a tributary of the North Platte River in Nebraska, Red Cloud early distinguished himself as a warrior. By the 1860s Makhpiyaluta (his Native American name) was leading his own band of warriors and had gained an important reputation. In the Sioux War of 1865-1868 he was war chief of all the Oglala. In 1866 he learned of the U.S. government's intention to build the Bozeman Trail and to construct three forts along it; this road would run through land guaranteed by treaty to the Sioux. Red Cloud gathered 1,500 to 2,000 warriors and in December lured Capt. W. J. Fetterman and 80 soldiers into a trap and massacred them. Only the severe cold of winter prevented his overrunning the post itself.

Though at the famous Wagon Box Fight of August 1867 Red Cloud saw the deadly accuracy of the U.S. Army's new rifles, the government conceded defeat in 1868. The Bozeman Trail was closed and the forts abandoned. The Sioux happily set fire to these forts while Red Cloud went to Ft. Laramie, Wyo. Here on Nov. 6, 1868, he signed a treaty that, unknown to him, provided for reservations and the cession of certain tribal lands. Finding out the terms of the treaty, angry young warriors turned more and more to the militant leader Crazy Horse. In 1870 Red Cloud journeyed to New York and Washington, D.C., to clarify the treaty and to speak in defense of the Sioux. His speeches aroused public opinion to the extent that the government revised the treaty. A special agency for the Oglala Sioux was created on the North Platte River.

Thereafter Red Cloud counseled his people to remain peaceful. He frequently charged the government agents with fraud, graft, and corruption, but he advised the Oglala to be loyal to the U.S. government. During the final Sioux War, of 1875-1876, though he opposed the war faction led by Crazy Horse, he refused to cede the Black Hills. In 1881 Red Cloud was removed as chief. Thereafter he declined in prestige and importance. His tribe was moved to the Pine Ridge Agency in South Dakota following the final Sioux War. He became blind in his later years and died at the Pine Ridge Agency on Dec. 10, 1909.