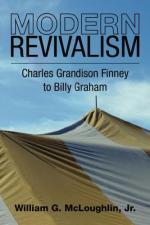 Get Charles Grandison Finney from Amazon.com
View the Study Pack

This Biography consists of approximately 2 pages of information about the life of Charles Grandison Finney.

Charles Grandison Finney (1792-1875), American theologian and educator, was a famous evangelist who brought frontier religion to the urbanized East.

Charles Finney was born on Aug. 29, 1792, in Warren, Conn.; his family moved to Oneida County, N.Y., about 1794. A self-assured young man, he decided after high school not to attend college. For several years he taught school in New Jersey, but his family finally persuaded him to return to western New York to study law.

Finney's interest in religion at this time was only perfunctory, because he found orthodox Calvinism unpalatable. Thus his route to a religious "awakening" was outside the institutional church. Observing that legal decisions often quoted Scripture, he began to read the Bible. He became concerned as to how man could achieve salvation, finally concluding that, instead of waiting upon God's regenerative spirit, any man could exert himself to give up sin and accept Jesus as a redeemer. In 1821 he had a mystical experience in which he believed he stood face to face with Jesus. From this time he devoted his energies to preaching revivals. He was licensed as a Presbyterian minister in 1824.

Finney was a masterful pulpit orator. He addressed the audience as sinners and prayed for them by name. He prolonged his meetings until early morning and even carried his ministry into the factories. Only his success at winning converts persuaded more orthodox clergymen to condone his techniques.

In 1828, after a fruitful campaign in western New York, Finney visited Philadelphia, Providence, and Boston. In 1832, at the invitation of several prominent businessmen, he moved to New York City. He was plagued with illness, and his sojourn was unhappy. Three years later he accepted the chair of theology at Oberlin College.

Finney devoted much of his time to teaching and writing. Lectures on Revivals of Religion (1835) was a manual on conducting revivals. His subsequent works, Sermons on Important Subjects (1836), Views of Sanctification (1840), and Lectures on Systematic Theology (1846), elaborated his belief in the perfectability of man. He supported the temperance movement and condemned the "sin of slavery." Drawing his following from the professional and business classes, he taught the value of charitable and philanthropic enterprises.

In 1851 Finney became president of Oberlin, a position he held until the end of the Civil War. Though hampered by illness, he conducted revivals until his death on Aug. 16, 1875, in Oberlin.

Charles Grandison Finney from Gale. ©2005-2006 Thomson Gale, a part of the Thomson Corporation. All rights reserved.