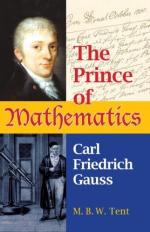 Get Carl Friedrich Gauss from Amazon.com
View the Study Pack

This Biography consists of approximately 3 pages of information about the life of Carl Friedrich Gauss.

Carl Friedrich Gauss was as eccentric as he was brilliant. Known primarily for his work in mathematics, he also made contributions in physics, astronomy, and magnetism.

Born at Brunswick, Germany, on April 30, 1777, Gauss was a bona fide genius, able to make calculations before he was able to talk. At the age of three he was making corrections to his father's additions. He taught himself to read and regularly kept lists of numerical data, including such useless tables as how many days various famous men had lived. Gauss not only lived for numbers, he was consumed by them.

Gauss's father, recognizing the boy's talent with mathematics, encouraged his son. At the age of 14, Gauss was able to obtain a stipend from Duke Ferdinand of Brunswick to devote himself to science. Gauss eventually went on to the University of Göttingen in 1795 and obtained his doctor's degree in 1799.