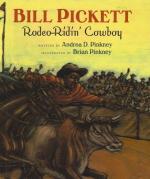 Get Bill Pickett from Amazon.com
View the Study Pack

This Biography consists of approximately 6 pages of information about the life of Bill Pickett.

Known as the "Dusky Demon," Bill Pickett (1870-1932) was the best-known African American rodeo performer of all time. He invented the rodeo sport of bulldogging, now known as steer wrestling, and entertained millions of people around the world with his riding and roping skills.

Western legend, Bill Pickett, was only five feet, seven inches tall and weighed only 145 pounds, but he was all muscle, a larger-than-life Western legend in his own time. His rodeo career spanned more than 40 years. He rode wild broncos and bulls, and was a professional cowboy and rodeo champion. Pickett performed all over the world in wild west shows, circuses. world's fairs, and worked for 25 years with the 101 Ranch's Wild West Show in Oklahoma.

Steer wrestling, which is still a major event at all rodeos, was invented by Pickett. In this event, a 500- to 600-pound steer is released from a...

More summaries and resources for teaching or studying Bill Pickett.

Bill Pickett from Gale. ©2005-2006 Thomson Gale, a part of the Thomson Corporation. All rights reserved.