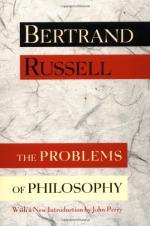 This Biography consists of approximately 5 pages of information about the life of Bertrand Arthur William Russell.

The Welsh mathematician, philosopher, and social reformer Bertrand Arthur William Russell, 3d Earl Russell (1872-1970), made original and decisive contributions to logic and mathematics and wrote with distinction in all fields of philosophy.

Bertrand Russell was born at Ravenscroft, Monmouthshire, Wales, on May 18, 1872, into an aristocratic family with many distinguished and some eccentric members. By the time he was 4 years old, his parents were dead, and his paternal grandparents, overturning his parents' will specifying that the child be reared by two atheist friends, became his guardians. Russell's grandfather, Lord John Russell, twice prime minister to Queen Victoria, died 3 years later, and young Bertrand was left in the care of his grandmother, a lady of strict puritanical moral views who nevertheless gave him great affection and "that feeling of safety that children need."

Russell's early education was provided at home by tutors, and in retrospect...